Situated about two kilometres from the centre of Campbelltown are the iconic twin silos. They've been a landmark on Appin Road for many years, somehow surviving demolition when Appin Road was re-aligned and widened. The twin silos continue to stand proud and serve as a reminder of Campbelltown's rural past.

The land that the silos were built on was originally a 30 acre land grant given to James Haydon. He sold 28 acres of this to George Simpson in 1828. Simpson built a house on this land between 1828 and the early 1830s. The house was described in an early heritage study as being located at 302 Appin Road, having early colonial characteristics and stood very close to the old alignment of Appin Road. The walls were of stone and brick, stuccoed, windows were small paned, the front door had side lights, the verandah was stone flagged. The house passed through many hands until was eventually demolished in the 1970s. 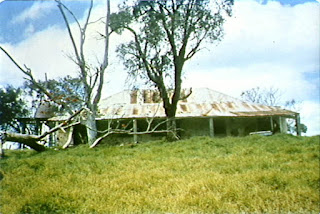 A rear view of Simpson's Farm House, Appin Road. The house was demolished in the 1970s. (Campbelltown and Airds Historical Society)

It is likely that the silos at Ambarvale were built under the unemployment relief scheme, or at least drew on guidelines and plans provided by the Department for the construction of concrete overhead silos under that scheme. Long time Campbelltown farmer Arch Walker said the twin silos were built in 1933 or 1934 while the Johnston family leased the property from Jeremiah Quirk. The size of the silos were built according to the size of the herd on the farm. This was about 50 to 60 head of cattle. The silos are about 7.7 metres high with each having a diameter of 4.7 metres. When full they could hold between 85 and 107 tonnes.


After the nearby farmhouse built by George Simpson was demolished in the mid 1970s, the silos were the only remaining structures on the land. A caption under a photograph of the silos from a 1977 edition of the Campbelltown-Ingleburn News describes the silos as finding a new lease of life and served as an advertising structure for the new suburb of Ambarvale. The caption also explained that the towers would be demolished to make way for the widening of Appin Road. The road was rebuilt in 1981 but the towers miraculously survived. 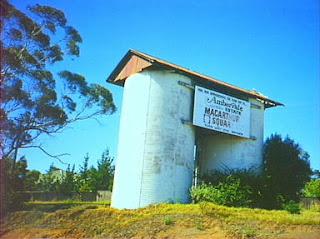 The silos in 1988 with the advertising hoarding still on them (C. Sullivan Collection)

There are moves under way to have further restoration work done on the towers. They are now under the responsibility of the Roads and Maritime Services.

The silos were chosen as the emblem for Ambarvale Public School.