An author talk and two historical displays highlight what's coming up in the Local Studies section at Campbelltown Library.

On Thursday July 30 at 1pm HJ Daley Library will host author Rochelle Llewelyn Nicholls for a free talk about her new book Joe Quinn Among the Rowdies: The Life of Baseball's Honest Australian. I have written about Rochelle's book in a previous post on this blog.

Before its 20th-century Olympic trailblazers, and Depression-era icons such as Phar Lap and Don Bradman, came an Australian sporting pioneer who was celebrated on the most glamorous stage in the world-American major league baseball. Formerly from Campbelltown, Joe Quinn's story has, until now, been lost in the land of his birth. Meet Australia's first professional baseball player and manager, whose willingness to "have a go" in the grand Australian tradition will live long in the minds of sports fans on both sides of the Pacific.

Booking for Rochelle's talk are essential and can be made by contacting the library on 4645 4436.

We currently have on display at HJ Daley Library an exhibition on HistoryPin. Campbelltown Library uses HistoryPin to show then and now images of local scenes. The images are taken from our photographic database Our Past in Pictures and, with the use of Google Street View, the 'then' images are overlayed on to the same position supplied by Google Street View. You can also check out HistoryPin on our website at http://www.historypin.com/channels/view/16333020/#|photos/list/ 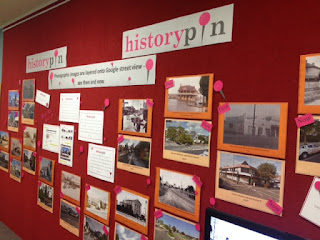 From July 13 to 31 we will host a display for Bradbury's 50th anniversary called From Sherwood Hills to Bradbury. It will reveal how much change the suburb has undergone since Lend Lease's first stage was completed in 1965. Accompanying this will be a feature on Campbelltown pioneer William Bradbury whom the suburb is named after. The display coincides with the Campbelltown and Airds Historical Society's launch of it's Grist Mills journal on William Bradbury. It will be launched at 'Glenalvon' on July 11 at 10.30am.
Posted by Andrew Allen at 17:54