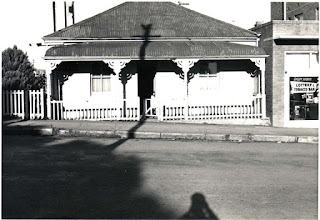 The photograph above was once 29 Railway Street and was taken in 1962. Paul O'Loughlan lived here with his family. This house was built in 1872 and had numerous owners over the years starting with Elizabeth Graham. The O'Loughlan family were the last to live there until it was demolished in 1967. According to Paul the house was built of sandstone and was freezing in winter. There is a red post box on the exact site today. 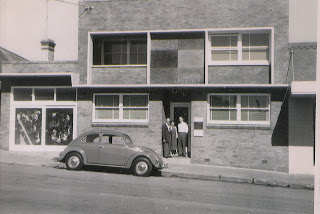 This photograph was taken in September, 1959 and is of 23 Railway Street. The front section was re-developed about 1959-60. It was eventually resumed by Campbelltown Council in 1975 to extend the car park. The building included a hairdresser, doctor's surgery and a first floor flat.

Pictured in the photo are from left Jack O'Loughlan, Laura O'Loughlan and Paul O'Loughlan. It's not known if the O'Loughlans owned the VW Beetle!