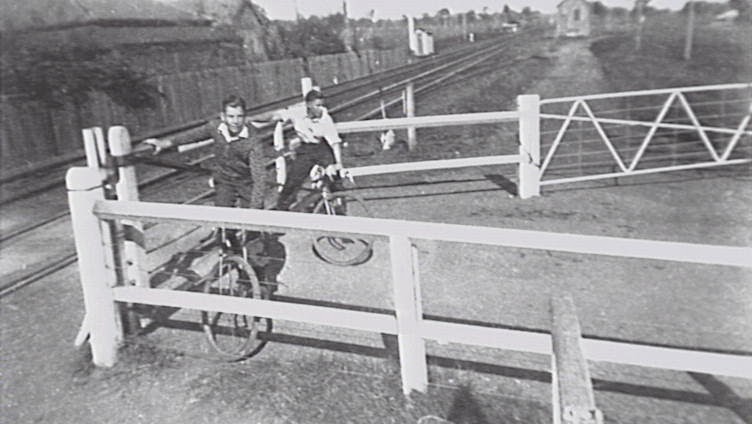 Can you help us identify these boys? The photograph shows two unidentified cyclists taken at the Minto railway level crossing gates in 1940.

The level crossing at Minto no longer exists. It was located at the southern end of Minto Railway Station platform. The level crossing was originally on the northern side of the station and there is still evidence of this crossing.

In the photograph there can be seen a house behind a paling fence. This was the gatekeeper's cottage. It was a large weatherboard house with three bedrooms, a large loungeroom, big diningroom and a large laundry out the back. As you can see from the photo, it was right up against the railway line and would therefore prove extremely noisy for the people living there.

It was once customary for widows and families of railway men to be in charge of opening and closing railway gates at crossings. This was still the case by the time World War Two came around, although railway staff were then available to perform this task between 5am and 11pm. The hours after this were still the responsibility of the family at the gatekeeper's house. My source for this information is Bryan Chrystal whose family lived in the cottage in the years immediately after the war.

According to Bryan the cars would arrive at all hours of the night. "They would arrive at the gates, blow their horn and mum would get dad or myself or John up and we would open the gates winter and summer." He remembers when the big express trains left Ingleburn Station that "we could tell and it would be something like three or so minutes before they came past our place, because one of the lattices on the side verandah just used to rattle and you could hear it rattling".

If anyone can identify these boys or provide more information on the level crossing, we would be grateful.

Bryan's interview can be accessed here at http://www.campbelltown.nsw.gov.au/CampbelltownRecollectionsstoriesfromourpast

The introduction to the interview was filmed on the site of the gatekeeper's cottage.