The Spanish Influenza epidemic of 1919 was one of the deadliest outbreaks of disease the world had seen. Soldiers returning home on ships from the First World War brought with them the disease. Campbelltown didn't escape the carnage. The flu was at its worst in the town between April and July of that year.

There is some conjecture about how many deaths it was responsible for in Campbelltown. Between April and July seven burials took place alongside which entries in the St Peter's Registers have the marginal note- "Pneumonic Influenza." The urgency of the situation is emphasised by the notation alongside the Burial entry for Leslie James Jones, aged 8 months- "Died in Emergency Hospital- Campbelltown Public School." Officially out of the 21 reported cases, there were three deaths- an elderly man, a child and the Reverend J.R. Hunter of St Peters who died in July 1919.The death of Reverend Hunter was a severe shock to the community. He had been confined to his bed for only 10 days. He was aged 60 and left behind a wife and daughter.

At Campbelltown school 150 children were enrolled before the disease broke out but when school returned in May less than 30 attended, the rest kept at home by worried parents. A mortuary was erected by council and the infant's school became an emergency hospital (where Leslie Jones died) for 6 weeks from March to May 1919. A Nurse McRae at the hospital also contracted the disease but luckily was only in a mild form.

In churches masks had to be worn and worshippers were required to be 3 feet apart to comply with Government regulations. Shops were not allowed to hold bargain sales and drinkers could not stay in an hotel bar for more than five minutes. 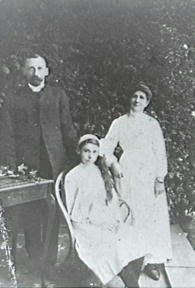