Hugh Byrne was famous for his role as lieutenant to Michael Dwyer in the 1798 Irish Rebellion. This was an uprising against British rule lasting from May to September that year. He fought at the battles of Arklow, Vinegar Hill and Hacketstown. After being transported for his actions, Byrne eventually settled and died in Campbelltown.

Hugh Vesty Byrne was born around 1777 in County Wicklow in Ireland. He used the name Vesty in honour of a forebear who fought for Irish independence in the 17th century.

With the retreat of the rebel force into the Wicklow Mountains, Dwyer and a small band of loyal followers including Byrne held out against the British and Protestant forces. Dwyer however ended up surrendering and Hugh was imprisoned at Wicklow Gaol. He managed to escape and rejoined Dwyer in the mountains. He surrendered to English authorities in 1803 and was sent back to gaol.

It was decided that Dwyer and his 4 lieutenants, including Hugh Vesty Byrne, would be sent as exiles to New South Wales. They became known as the 5 Wicklow Martyrs or Wicklow Rebels. In 1806 they arrived on the convict ship "Tellicherry".

Byrne was promised and given land and freedom once in Australia. Originally given land along Cabramatta Creek, Hugh later sold this and acquired more fertile land at Airds (today's Campbelltown).

Hugh Byrne's good luck turned against him however when Governor Bligh had him and the other rebels arrested on charges of seditious activities. They were cleared by the court only to be re-arrested by Bligh and sent to various convict depots including Norfolk Island and Van Diemen's Land. After Bligh's arrest and release from office, Byrne and the others were released and pardoned.

Hugh returned to his land at Campbelltown. He made a comfortable living and in 1835 had another 100 acres granted to him. By now he was a respectable law-abiding citizen, a far cry from being an exile and one of the Wicklow Rebels.

Hugh Vesty Byrne died in 1842 and is buried in St John's Cemetery in Campbelltown next to his wife Sarah. There is no headstone. 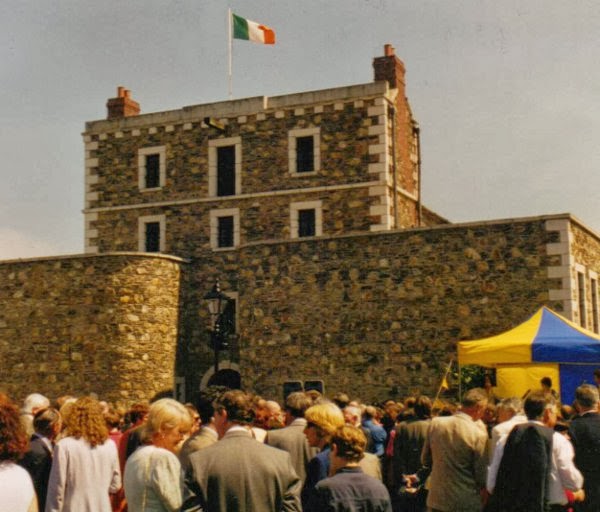 An alert reader, Janine, has brought to my attention that Hugh Vesty Byrne has an above ground vault at the cemetery which he shares with members of his family.