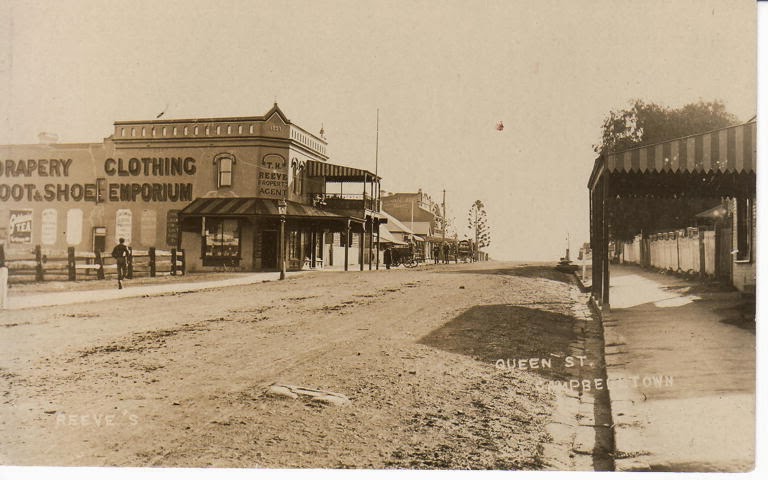 This photograph shows Reeve's Emporium on the corner of Queen and Patrick Streets around 1900. (Judith Roberts Collection)

Reeve's Emporium was located on the north-west corner of Queen and Patrick Streets in Campbelltown or at 135 Queen Street. The site today is occupied by Richardson and Wrench Real Estate.

Built in 1897, it was of rendered brick, of two storeys, and with a corrugated iron roof. It also had a balcony up until 1951 when a motorcycle crashed into it and it had to be demolished.The shop windows had roller shutters which were lowered after business hours. For late shopping on Friday nights, three lanterns were suspended under the awnings. These operated on petrol, and had to be pumped and fitted by a mantle.

It was founded and erected by Thomas Henry Reeve. A relative named Will Craft helped Reeve build it. Thomas Reeve moved to Campbelltown from the city where he had an ironmongery business in George Street, Haymarket.

The business was sold in 1954 to A.J. Daniel. It later became Lombard Discounts Pty. Ltd. and the CBC bank, although it had been greatly modified.
Posted by Andrew Allen at 12:31