Swimming in the Cattle Tank and Reservoir

Located in Allman Street, Campbelltown are the historic Cattle Tank and Reservoir. Both were constructed and completed by convict labour in the 1830s. They were regarded as necessary as water supply was a constant problem for both farmers and townspeople living in Campbelltown.

Both the Cattle Tank and Reservoir appear mostly to have had an ample supply of water, even during droughts. So of course one can imagine how alluring they were to the locals on a sweltering Campbelltown day. An interesting photograph in our collection is of "Jack's Day"- a regatta held at the site in 1917. It shows a crowd of people gathered around the Reservoir and a couple of local lads cooling off in the water. The newspaper reported "A band of 20 performers headed a procession from the railway station to Hurley Park, where juvenile sports and aquatic displays in the once tabooed reservoir exhilarated spectators".

The Cattle Tank has also been the scene of drowning tragedies over the years. In 1925 seven year old Leniel Johnson drowned after she accidently fell in while playing with her sister. She had been in the water for 20 minutes before she was found but couldn't be revived. Ten years later sixteen year old Betty Humphreys drowned. She had been suffering a nervous breakdown according to the 'Campbelltown News' and ran from her home in Allman Street and jumped in the Cattle Tank. Despite attempts from a young boy named Jack Hadden, she was unable to be revived. The newspaper mentions a mass of tangled wire and rubbish under the water so the days of a clean place to swim appear to be gone by then.

I interviewed both Jim Summers and David Milliken and they described their experiences of swimming in the Cattle Tank when they were boys. Jim, who was born in 1929, recalls his days of swimming there: "we used to swim in those and when I was a kid they were always full of water. We used to catch fish and eels in the smaller one on the bottom side. The tanks would dry up and you could walk in them. Then they would fill up and the fish and eels would be back, they must stay under the mud." He also went on to explain how there used to be a creek that ran down from the tanks in Allman Street. It ran down to Oxley Street and came out in Dumaresq Street. In the late 1930s council, worried about flooding from the Reservoir and tank, decided to drain water from them. Only a year earlier however, there were plans to convert the Cattle Tank into a 'glorified swimming hole', with preliminary estimates of the cost put at 400 pounds for cleaning out and concreting the tank, plus 5 pounds per refill. The proposal was eventually dropped in the late 1930's after another expert calculated a more realistic cost of 2500 pounds for the conversion.

David Milliken described swimming in there as a kid with whatever was underneath! "Every now and again you would get a bite on your foot from a yabby."

The Cattle Tank continued to be used to water stock as late as 1960. By the early 1960s, both the Reservoir and Cattle Tank were all but dry. Subsequent earthworks for a playing field at the top of Hurley Park radically changed the topography of the site. Although dried out today, both catchments continue to provide recreational facilities for nearby residents- albeit in the form of a cricket pitch or sunken volleyball arena. 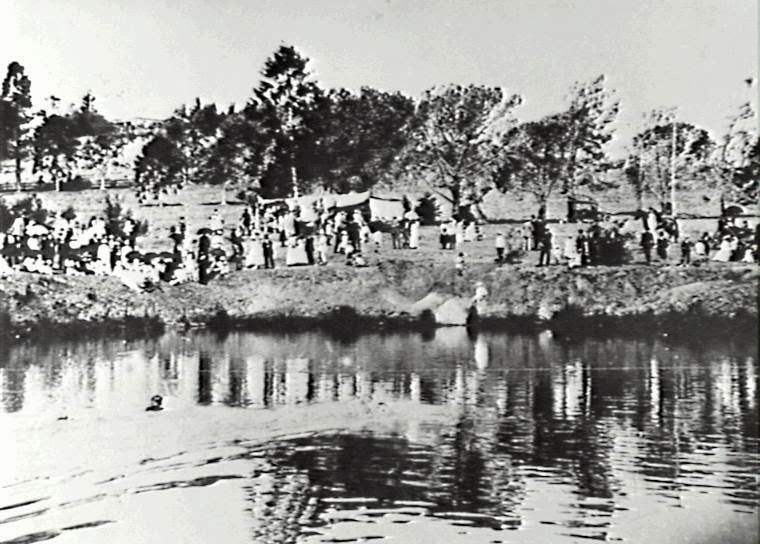 The photograph above shows the regatta held on the cattle tank in 1917. Note the young boy in the water.

Interviews with Jim Summers and David Milliken held at Campbelltown Library
Posted by Andrew Allen at 10:43