She has been referred to as a headline generator, a mould-breaker and a trailblazer, elected as mayor of Campbelltown at the end of 1961, Alderman Kath Whitten became the first woman to ever hold that position.
The idea of a woman holding such a senior rank dismayed many men and they made no secret of the fact that she had been elected because of a tactical mistake, the result of a political tug of war between council’s two most influential men, Greg Percival and Clive Tregear.

Nonetheless the new Mayor proved both talented and capable and the public grew to be proud of their “novelty” mayor, her biggest problem was winning over her colleagues.


There was friction from the start between the Mayor and her male colleagues, with Council refusing to buy her a better fitting mayoral robe (the existing robe was fitted for a large man and held together by safety pins) so she purchased her own sable–trimmed robe. Sympathetic media coverage of the matter only angered her opponents but her biggest confrontation was to be with councilor Guy Marsden over Government plans for Campbelltown to become a “satellite city”.
Whilst her one year term included walkouts by aldermen, an unsuccessful vote of no-confidence and the eternal opposition of several key councilors that resulted in a failed bid to regain the mayorship, even her harshest critics acknowledged her dignity and decorum that she showed in office.


Retiring from council in 1971, she remained Campbelltown’s only female Mayor until Cr Meg Oates was elected mayor in 1993.
By Samantha Stevenson 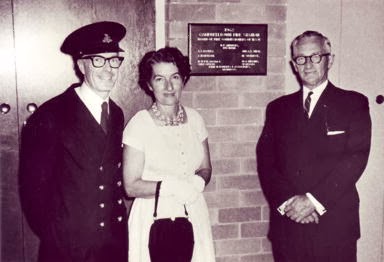