Exciting news! Campbelltown Library has acquired artefacts from an archaeological excavation of Macquarie Fields Gatehouse. The excavation was undertaken by Archaeological and Heritage Management Solutions in late 2011 after they were comissioned by the Glenfield Junction Alliance  to carry out the excavation. Road works unearthed brick features leading to the archaeological investigation. The find included bottles, glass, ceramics, building material, metal and bone.

The site area was adjacent to Campbelltown Road, Glenfield, near its intersection with Beech Road. It was situated in the extreme north of the Campbelltown Local Government Area boundary.

In 1810 the Surveyor General James Meehan had 10 acres of his land grant at Macquarie Fields in cultivation, 40 acres cleared and a house with 4 men employed. At the end of 1820 the Rev Thomas Reddall rented out the main building at Macquarie Field for a school. The building became known as Meehan's Castle.

The gatehouse at Macquarie Field appears from historical evidence to date from the latter part of the 1820s and the available evidence from the occupation deposits do not contradict that date. Archaeological evidence suggests that the gatehouse was demolished in the 1870s. The death of the owner and subsequent sub-division of the estate would've been the probable reason.

In the early 1900s the architect William Hardy Wilson embarked on a personal quest to record the finest colonial architecture still extant around the Sydney district. One of the sites he recorded, using just art paper stained with tea, was the gates at Macquarie Field. The drawing was made after the gate house was demolished yet it was recorded in the drawing. Wilson was presumably informed of its presence or perhaps some of the footings were still visible and he was able to use these for his sketch.

Between 1917 and 1924 the northern part of the property was sold. The gates had probably gone by 1924 as they are not mentioned by the owner in his reminiscences on the estate.

Gate lodges or houses were considered more than structures to provide security or simple shelter for gatekeepers. As the historian Timothy Mowl said "Lodges were not merely garden structures, they were designed as entrances, garden buildings on the perimeter to lure respectable visitors to view similar pleasures within."

The artefacts will be stored in the Local Studies Collection and will be displayed to the public on a date to be decided. 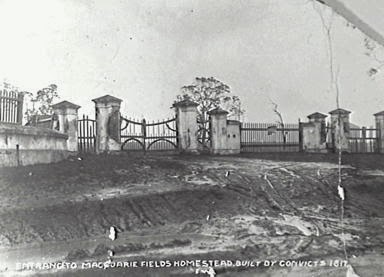