Early Entertainers at the 'Catho'

When the Campbelltown Catholic Club, or The 'Catho' as it is affectionately known, first opened on December 5 1968, it meant that the town could finally draw big name acts to fill the entertainment void in Campbelltown. With no nightclubs, regular concerts or cinemas (the Macquarie Cinema had closed a few years earlier), the club was very welcomed by the locals.

The first major stars that the club attracted were Little Patti, Judy Stone, Toni Lamond, Frankie Davidson, The Delltones and Slim Dusty. The first really big star was considered to be Normie Rowe, although some of the senior club members thought he was too 'hip' a character to be on stage. Another famous performer was Barry Crocker, who staged his own show on three consecutive nights. In excess of 600 people came to watch 'one of the greatest shows ever performed in Campbelltown'.

The early days saw some uncomfortable moments however. Barry Crocker caused a stir by swearing mildly on stage, but it was English comedian Dickie Valentine that caused the most outrage. He dropped the F-word into his routine, causing the manager to climb on stage and order him off. This caused national headlines.

No visiting act however caused as much fuss as Winifred Atwell. Winifred first visited the club in November 1970. She was a world-famous US pianist and the people of Campbelltown treated her like royalty. They loved her and she loved them back. She stayed to perform eight concerts and attracted an amazing 2500 people. Chris Thomson, formerly Vardy, who worked at the club at the time, told me in an interview that she was brilliant and made people outside of Campbelltown know that they could come here to see someone known around the world. It, more than any other single event, put the club on the entertainment map. Winifred Atwell later settled in Sydney. 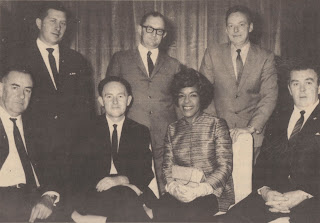