Situated in Queen Street opposite Cordeaux Street in Campbelltown, the Balalaika Cafe was a popular dining venue during the 1940s through to the 1960s. Its popularity existed well before this time however as Jack O'Loughlin's cafe and tea rooms.

My research revealed that a building existed on this site in the early 1900s and up until the mid 1920s was known as Crow's Bakery. A photograph of this building exists in our collection. It shows the bakery located next to a water tower that belonged to the fire station next door in Queen Street.

By at least 1925 the site was occupied by O'Loughlin's tea rooms. I'm not sure if by this time the building that housed Crow's Bakery was a different building or not. The tea rooms were described as "A cafe built elongated and low-set of weatherboard and in which soft drinks and small goods were sold. Meals were served on a long table." The tea rooms were a favourite meeting place on Saturday nights, especially with sporting people who gathered on the front verandah. Apparently the next day would see a mass of piecrusts, saveloy skins, peanut shells, cigarette butts, soft drink and an occasional beer bottle all scattered around the place!

Some time in the early post-war years the place became known as the Balalaika Cafe. In 1955 it was bought by the future mayor of Campbelltown Cec Mulholland. Cec and wife ran a successful business until ill health forced him to sell the cafe.

The shop had food window displays, such as sandwiches, and counter displays of products inside to the right of the front door. Out the back there was a kitchen and two bedrooms.

Some interesting anecdotes about the place include the walls having paintings of historical places of Campbelltown such as Fisher's Ghost Creek. There is also a reference to a small library in the cafe that was run by a Mrs. Lloyd. It was like a small community centre where you would exchange a chat or come to pass the time of day. When the new municipal library arrived in 1965 this small library closed.

The Balalaika closed some time in the mid to late 1960s. The building was home to the Bank of NSW by 1969. It is now demolished. 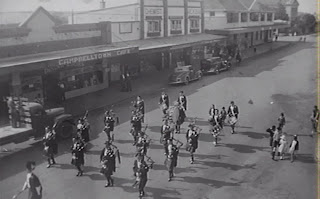 This photograph shows the Balalaika in the 1940s. The sign on the building says Campbelltown Cafe but below this is another sign that reads Balalaika Cafe. (click on the image for a larger version)