The House of Stone

Osbaldeston is a bush cottage with low ceilings, built entirely of stones and rock quarried on the property! The cottage on Georges River Road at Kentlyn was built by Tom Barnes between 1932 and 1934 and named after the English town that he came from.

The family arrived in Australia in 1930 and came to Kentlyn in 1932. They took up 52 acres of land which stretched from Georges River Road down to the river. The family originally lived in a tent until Tom later built a hut of bark, saplings and bags. Tom Barnes then began working on slowly building his stone cottage. He formed a track down to a sandstone quarry, and carried slabs of stone, some individually up the steep track and some in a wheelbarrow.

The kitchen cupboards were made of stone. A bath and wash basin were carefully chiselled out of stone, which was smoothed with cement. The "open air" laundry had tubs and a copper, all chiselled from stone. The laundry area was paved with sandstone. Even the wood box was made of stone.

Osbaldeston still stands today in Georges River Road and remains in its original condition. It is listed under the NSW Heritage Act. 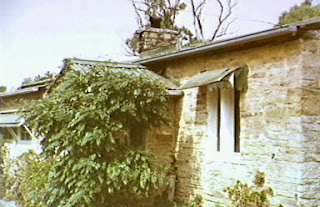 Osboldeston on Georges River Road photographed in the 1980s