Campbelltown was connected in two ways to the life of the famous aviator Sir Charles Kingsford Smith. The first was in 1926 when "Smithy" visited the property of "Springmead", located in today's suburb of Denham Court. After endless research into this visit I have come up with very little information about the day. Photographs in our collection show the aviator in his plane surrounded by scouts from the 1st Ingleburn Group. This must've been a memorable occasion for the owners of 'Springmead' and the starstruck scouts that day.

The second connection is through the making of the 1946 movie called "Smithy". An airstrip at Menangle Park that was used during the Second World War was used for particular scenes from the movie. Actor Ron Randall, in his first major acting role, played the part of "Smithy". For two sundays in November of 1945 a number of locals were selected to be part of the filming at Menangle. Owing to unfavourable weather conditions the screenings made on the first occasion were not satisfactory and therefore had to be re-enacted again on the following sunday.

Of course this was a novel experience for the group. Paul O'Loughlan from Campbelltown was a young lad of about ten when he was filmed. He recalled in his Campbelltown Recollections interview that he was filmed getting in and out of the plane but to his disappointment not required to actually fly in the plane. Further adding to his disappointment was that the scenes that he and the other locals were filmed in were cut from the final version. However the local cinema owner was able to arrange for the removed scenes to be included in the screening at the Macquarie Cinema in Campbelltown. 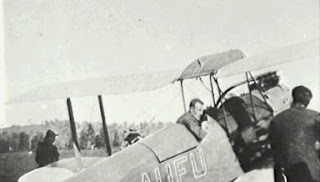 Sir Charles Kingsford Smith in his plane at "Springmead" with 2 unidentified members of 1st Ingleburn scout troop in the background.