Thomas Charles Stanley was born in 1844. He dropped the name Thomas and used Charles throughout his life. In 1871 he married a local girl named Emma Fieldhouse who was the daughter of a well known identity George Fieldhouse. George owned the Jolly Miller Inn in Queen Street.

Charles Stanley had a very successful career as a jockey. His achievements included riding the winners of the AJC Derby in 1866 and 1867, the Victorian St Leger in 1868 and the win in the Melbourne Cup in 1868 on Glencoe.

Charles rode for the stable of the famous trainer of the day 'Honest John' Tait. Glencoe was John Tait's second win in the Melbourne Cup. However, he was not an easy horse to train or ride. Glencoe was often referred to as 'a dog' by Charles Stanley who detested riding him. He eventually urged Tait to stop training the horse, which Tait eventually did. Charles rode locally for Judge Cheeke of Varroville.

Charles, or Charley as he became affectionately known, took over the licence of the Sportsman's Arms Hotel. This was on the site of the present City Hotel on the corner of Queen and Cordeaux Streets. He died on February 12, 1914 at his home in Bondi and was buried in St Peter's Cemetery in Campbelltown. He and Emma had eight children. 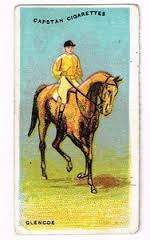 A Capstan Cigarette card of Charles Stanley on Glencoe

A sketch of the day showing Glencoe winning the 1868 cup