From the early 1950s to 1986 Campbelltown's skyline was dominated by a large coal loader just south of Campbelltown Railway Station. The prominent, albeit ugly, coal loader was moved to a rutile mine on the tourist island of Stradbroke Island, south-east of Brisbane.

The coal loader was constructed on the site in the early 1950s but had not been used for many years following the flooding of the Burragorang Valley. Coal was no longer transported from Campbelltown so it was no longer needed.

Campbelltown Council received numerous complaints for years about the loader and how ugly it looked. The decision to move it on was therefore welcomed by council. 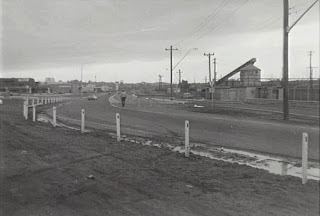 Hurley Street, Campbelltown looking south with the coal loader beside the railway line and the Twin Cinema in the distance ca. 1983 (Robertson Collection).