Campbelltown was thrown into a state of panic one day in 1963 when two prisoners escaped from the lock up at the local police station. The Campbelltown-Ingleburn News reported that the men used a piece of board wrenched from the cell to prise open bars at the top of the lock up yard.

The two men were James Thornton aged 20 and Alfred De Bono aged 23. They had both appeared earlier in the day at the Campbelltown Quarter Sessions and had been remanded. Thornton had been charged with breaking, entering and stealing and De Bono with two counts of stealing.

As soon as the escape was noticed, the police organised a wide search. Police sirens wailed, road blocks were set up and police examined all cars leaving the area. A watch was kept on the railway station. The escape soon became the talk of the town.

Early next morning a wet, muddy and tired Alfred De Bono was spotted by an Ingleburn nightwatchman and later surrended to police without resistance.

The newspaper report explained that police were still continuing their search for James Thornton. I checked the following week's edition and it mentioned that he still hadn't been apprehended. A check of subsequent editions revealed no further mention of him. 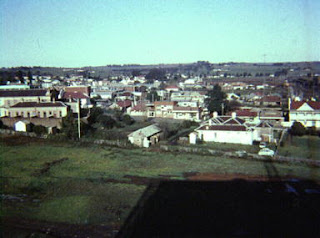 The photograph above shows the back of the police station and its outbuildings in Railway Street. This image was taken a year after the escape from the lock up.
Source: