Today the drive from Campbelltown to Wollongong takes about 45 minutes to complete. In your air conditioned car, the drive is pleasant as you meander along Appin Road passing through the quaint town of Appin. You eventually make your way to the steep but scenic Bulli Pass and on to Wollongong. Imagine what it would've been like for Campbelltown mail coach driver James Waterworth. Waterworth drove the mail coach from Campbelltown to Appin and on to Wollongong in the middle nineteenth to early twentieth century, usually in the early hours of the morning, in all weather and on a rough track. There was also the constant threat of attacks by bushrangers. Little wonder that he once remarked in old age "reminiscences, I can give you a book full."

James Waterworth was born in Parramatta in 1830 and baptised by Samuel Marsden that same year. He was raised as a child by the explorer Hamilton Hume, who bequeathed James a coach originally purchased in 1842 by a Mr Campbell. During his early years he was employed at the Cobb and Co stables. By the 1860s James was running a coach service using 'American vehicles' six days a week from Campbelltown to Wollongong, for which he was paid 490 pounds per year.

James Waterworth was held up by bushrangers on three separate occasions. On the first occasion he had as a passenger a little sickly man, who was coming back from Wollongong with 300 pounds, which he had collected in rentals. When the bushrangers stuck up the coach and began to search the passengers James picked the little man up and carried him into a nearby shed. "You surely wouldn't harm this poor sick fellow " he said, and the bushrangers let him go.

However on the second hold up a few weeks later he wasn't so lucky. The Sydney Mail reported on the 21 April 1866:

"The immunity which the Wollongong mail has enjoyed, at a time when in all parts of the colony the bushrangers were at work, appears to have ended, for twice within the last fortnight it has been stuck up, and the mail bags opened, and the passengers robbed.  About 2 o'clock am on Tuesday last, when the mail coach reached a place called Rose's Bush, about 4 miles on the Appin side of Campbelltown, three men came out of the bush and ordered the driver to 'bail up'."

Waterworth and his driver were tied up and the passengers robbed and left on the side of the road while the robbers drove the coach off back towards Campbelltown. The tree to which he was tied was known for many years as Waterworth's tree. The bushrangers were later caught. 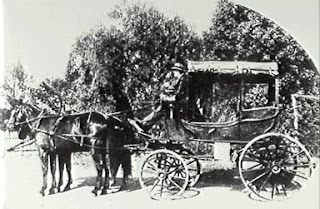 James Waterworth driving the coach that travelled from Campbelltown to Wollongong via Appin and Bulli. His large horse drawn omnibus was called the "Sovereign". This photograph featured in the Town and Country Journal in 1902.


A few years later in 1869 James was involved in another dramatic incident. In 1869 the Nepean River at Camden was in flood. Between 1 and 2pm on the day that the flood was at its peak, the mail coach from Campbelltown to Camden arrived on the bank, and the mailbag was shipped in a boat. James was one of the passengers in the boat when it upturned and all were cast into the 'boiling stream'. James Waterworth escaped but some of the others were not so lucky.

James Waterworth remained in Campbelltown for the rest of his long life. He was prominent at Campbelltown's centenary celebrations in 1920 and along with James Bocking was feted as one of Campbelltown's oldest residents. In 1924 he was present when the memorial tablet was erected to commemorate the Hume expedition on Appin Road. By then he was aged 94. 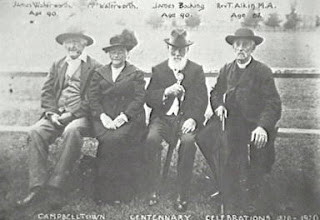 James Waterworth in pictured on the left with his wife at Campbelltown's centenary celebrations in 1920. The other men are James Bocking and Rev. Alkin.

James Waterworth passed away at his home at "Bonnie View" in 1926. "Bonnie View" was located in Sturt Street on the hill somewhere in the vicinity of where it intersects with Stewart Street. At the time of his death he owned a large amount of land around the town and had stables in a paddock behind Railway Street. He was buried next to his second wife in St Peter's Cemetery.

Whitaker, Anne-Maree 2005
Appin: The Story of a Macquarie Town