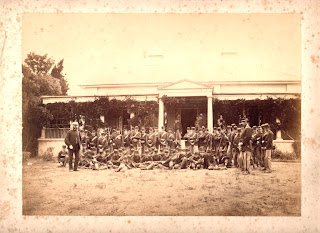 Of all the wonderful images we have in the library's collection, I think this is my favourite. It dates to 1866 and shows officers and other ranks of the St Marks Collegiate School Cadet Corps in front of Macquarie Field House. It was established as a boarding school for boys by the Reverend George Fairfowl Macarthur.

The school was moved from Darling Point by Macarthur to the 800 acre property of Macquarie Fields in 1858. It would come to prosper here and resident enrolments rose to more than eighty. Macarthur built up a cadet corps, systemized the curriculum and enlisted the aid of university professors. He also insisted that boarders should wear the cadet uniform every day as normal school uniform but day boys were not required to do so.

Military drill had been introduced to some schools in Sydney as early as 1834. A member of Macarthur's staff had been on a visit to England where he had observed the greater public schools operating cadet-training schemes. He noted the benefits that the boys derived from such training. This led to Macarthur requesting 'consideration of a proposal to institute a corps of cadets'.

The local studies section of the library contains the full list of names of the cadets and staff in this photograph.
Posted by Andrew Allen at 10:57