We Need Your Help! 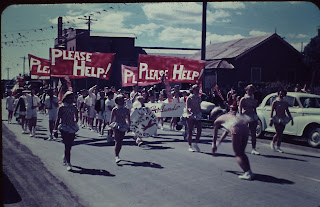 Campbelltown Library recently had some photographs donated to us. One of these photographs (above) is of a Fisher's Ghost Festival street parade in the early 1960s. The image shows a large group of girls in front of a banner that reads "The Flying Garlands" (click on the image for a larger view). Behind this banner are others that read Please Help! Note the young girl at the front about to perform a hand stand.

The photograph is taken in Queen Street near the corner of Browne Street. In the background is the old Macquarie Cinema demolished in 1979 and a house now also demolished.

Does anyone know who the flying garlands were? Please let us know.

One of our library staff located a State Library photograph of a group of girls performing acrobatics in the same parade on the same day. The photo has a caption of "Parade and fete in Campbelltown to aid the Beverley Park Orthopaedic Hospital for handicapped children". It is dated the 5th of September, 1957.
Posted by Andrew Allen at 16:36