The Struggles of a Local Postmistress

It's difficult to imagine anyone surviving on just 10 pounds a year, even in the first half of last century. Yet this was all that Elizabeth Greenwood survived on for running the post office at Wedderburn from 1896 to 1927. Miss Greenwood was appointed to run the postal service at her stone cottage at Wedderburn following a petition by the residents in March 1896. Michael O'Shannesy would deliver the mail to Wedderburn Post Office on horseback, three times a week on Mondays, Wednesdays and Fridays.

Letters held by the postal archives reveal her struggles to make ends meet. She begged for a few pounds to buy pigeonholes and a notice board. The Postmaster-General responded however saying he was not obliged to pay for extra expenses for "non official" offices. Over the years she also requested postal authorities to boost her yearly income of 10 pounds but without success.

In 1927 the post office closed its doors when Miss Greenwood became too ill to run it any longer. She eventually sold the cottage in 1936.

The stone cottage that Miss Greenwood ran as a post office still stands in Wedderburn Road. It has been neglected for years though with only the external walls still remaining. 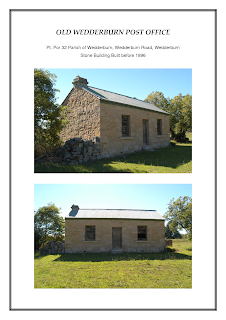