The first 9.8km long section of the F5 from The Cross Roads to Raby Road was opened to traffic on 26 October 1973. Costing $13.1 million dollars and taking four years to complete, this was the first of three stages and first section of the F5 Freeway to be opened. The second section between Raby Road and Camden Road at Kenny Hill was opened the following year.

Workmen apparently toiled into the early hours of the morning before that day's opening under floodlights and car headlights to finish the last quarter mile section of roadway. As usual the opening occurred amid claims that it was an election gimmick for the following month's state election. Predictably, the minister refuted these claims.

The Campbelltown Ingleburn News reported that 'At 9.30am the covers came off the huge signs erected at the expressway entrances and a trickle of traffic began using the new road. Most drivers chose the old route through Ingleburn Army Camp apparently (because of the huge crowds of workmen near the entrances) unaware the new freeway was open.' Construction of the new section required building nine bridges, including building twin bridges over Aero Road and Bunbury Curran Creek. 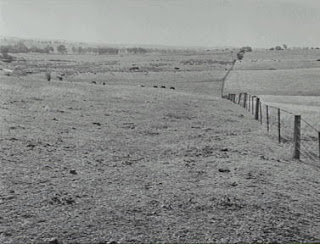 Site of F5 Freeway west of Campbelltown prior to its construction. This photograph was probably taken in the late 1960s.