As early as June 1827 a race meeting was held by Colonel Henry Dumaresq for the Sydney Turf Club in the bush near Campbelltown. This racecourse was probably located on the flats below Varroville. In June 1836 a meeting was called at John Hurley's King's Arms Inn to form a committee for a subscription race meeting. A two day race meeting was planned for September. The final event of the programme was a women's race in which six of the local 'lasses', 'exhibiting uncommon good judgement and skill', raced their horses around the track to win a saddle.

By the 1840s horse racing had become an annual event. Every September races were held on the Campbellfield Estate along Bow Bowing Creek (now Memphis, Nelson and Francis Streets, Minto). In September 1842 the "Australasian Chronicle" reported on the previous week's 3 day race meeting at this course. It described how 'No accident occured, and everything went off satisfactorily. The Campbelltonians enjoyed the performances of the Sydney band, which was in attendance, at night, after the sports of the day; and the young people of Campbelltown will bear in mind until next races the amusing gymnastics of Jim Crow, who was likewise in attendance".

In 1851 the Campbelltown Turf Club leased 60 acres from John Keighran for a racecourse.

Races were held at Menangle Park from the 1870s. Two railway sidings were built to bring spectators, competitors and horses directly to the track. In 1914 local Alfred Rose Payten designed the 3 grandstands at Menangle Park Racecourse.

There once existed a racetrack in Leumeah. It was originally known in the 1800s as Rudd's Racecourse. The racetrack was roughly bound by where today's Kingsclare Street, O'Sullivan Road and Beverley Park on the old Rudd Road are located. Alf Cooper, who passed away in 2010, used to do trackwork on it in the 1930s. He would train racehorses that belonged to George Chinnocks. Another local man, Clarrie O'Loughlan, trained trotters on the old racecourse as well. The racecourse later became part of the C.B. King Estate. 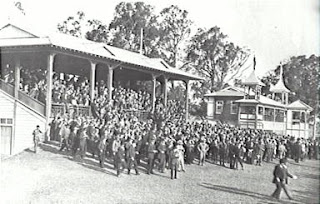 The opening of Menangle Park Racecourse in 1916

FOWLER, Verlie
Reminiscences of Alf Cooper
In Grist Mills: Journal of the Campbelltown and Airds Historical Society
Vol. 10, No. 4 1997
Posted by Andrew Allen at 15:58