On January 4, 1934 sixteen year old Gilbert Larcombe was accidentally shot while shooting rabbits only a few miles from his home at "Hillcrest" at Campbelltown. He was one of a party of boys hunting rabbits. A 12 gauge shot gun carried by another boy exploded, and the charge entered Gilbert's left leg causing horrific damage.

Gilbert Larcombe was admitted to a private hospital in Campbelltown but died early the following morning. His death resulted in a huge outpouring of grief within the Campbelltown community and a long and emotional obituary dominated the front pages of the local newspaper for that week. 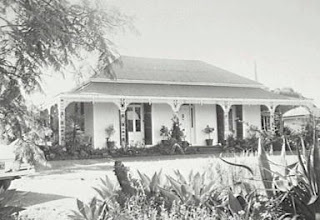 "Hillcrest" on Badgally Road, Campbelltown where the Larcombe family were living when Gilbert was tragically shot. (Macarthur Development Board).