He may not be as well known as other Australian explorers such as Sturt, Flinders and Burke and Wills but Henri Gilbert's achievements were just as admirable. The French journalist is believed to be the first white person to walk across Australia from west to east coasts. Gilbert travelled from Fremantle to Brisbane in 1898 solely on foot. His visits to towns and cities along the way, including Campbelltown, aroused much excitement and fanfare each time.

Gilbert was attempting to walk around the world by May 1900 and win a 10,000 pound bet put up by a Parisian syndicate. He left Paris on foot in February 1895 to walk around the world with special instructions not to beg his way or solicit help. By the time he arrived in Australia, he had already walked through Spain, the Middle East, India and Singapore.

At 32, he set off from Fremantle in August 1897, arriving in Brisbane in 1898. Gilbert had became something of a celebrity and large crowds came to see him. His diary, now held by the State Library of Queensland, is packed with Australian newspaper clippings about his travels. It talks about the harshness of the climate and countryside and describes his Australian trek as the "most suffering I have ever known". He came close to death when he collapsed from dehydration while following the telegraph poles through the Nullabor Plain. 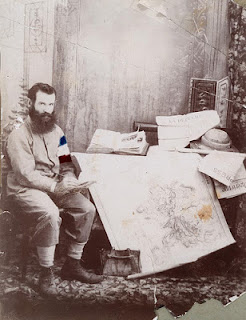 
Henri Gilbert's visit to Campbelltown in August 1898 created similar excitement. The Campbelltown Herald described him as the "French pedestrian". The newspaper wrote that "M. Henry Gilbert bobbed up serenely on Wednesday last. His arrival at Campbelltown was looked for by a large number of people, and during the time he remained in town he was the object of much curiosity. Immediately upon entering the place he sought the postmaster, and that gentleman, in a book provided for the purpose, certified to the arrival of Gilbert at Campbelltown on foot, the hour being 12 o'clock (noon)."

Gilbert took 3 hours to walk from Camden. After visiting the postmaster he visited the office of the Campbelltown Herald where he spent an hour or two and then set off in the direction of Sydney. He altered his plans at the last minute however and decided to remain at Campbelltown for the rest of the day and night. He left by train the next morning.

Nothing was heard of the adventurer after he left Brisbane bound for China. Dr Colin Dyer has recently published a book on the explorer. He has written to every fouth person with the Gilbert surname in his birth region of Nantes, France, and has tracked down Gilbert's birth certificate, but has been unable to discover his fate, or whether he indeed collected his bet.

Regarding Henri, Research at UQ at http://uq.edu.au/research/index.html?page=4164&pid=0
Posted by Andrew Allen at 10:22