In 1816 Governor Macquarie gave a grant of 140 acres to Joseph Phelps who sold it to William Bradbury the following year. Bradbury Park House was built on this land in 1822. That year Macquarie and his party were touring Airds and the Illawarra and they had breakfast at Bradbury's. Macquarie noted that Bradbury was then building a good two-storey brick inn on a "very pretty eminence immediately adjoining Campbelltown". He also wrote that he named it Bradbury Park. It would have been one of the first substantial private buildings in the town vicinity.

Bradbury Park House had a quadrangle of kitchen, servants' quarters, wooden stables, granary and barn behind. Elaborate flower and kitchen gardens lay to the south of the house. These gardens are featured prominently on an 1844 map of Bradbury Park Estate below. 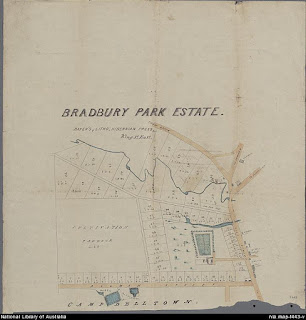 When Bradbury died in 1836, his estate was inherited by his daughter, Mary Shiel. Bradbury Park Estate was subdivided in 1844.

The house was located about 140 metres opposite where the town hall is located in Queen Street. Today's Asher Place off Bradbury Avenue is the location of the house. The two storey house still standing at the corner of  Moore-Oxley Bypass and Lithgow Street is said to look very similar to what Bradbury Park House looked.

Unfortunately Bradbury Park House was demolished in 1954. Interestingly, two nails from the building are held at the Powerhouse Museum at Ultimo. 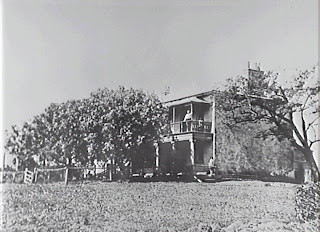