Readers of the Campbelltown-Ingleburn News would've choked on their corn flakes on the morning of Tuesday January 13, 1970 when they sat down to read their local newspaper. There on page 14 was an advertisement for Peter Williamson Toyota, Liverpool that featured a bare-breasted attractive young woman next to the heading of "Why Be Hot and Bothered". The ad went on to describe the benefits of buying their Toyota Hi-Lux and Hi-Ace and finished with the line "Demonstrators are always available".

Although 1970 was in the middle of the flower power and free love movements there was still a large element of conservative thought at that time. An ad like this would've been shocking for the largely innocent Campbelltown community. The advertisement attracted disapproval and condemnation and Peter Williamson Toyota was forced to make an apology in the following week's edition.

Below is the apology that appeared in the January 20 edition. The library holds past issues of local newspapers on microfilm and hardcopy. 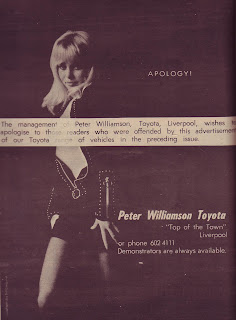