Campbelltown once had an oar factory. The factory, built of sawn timber framework, was founded in 1947 by Thomas William Gonsalves in a large garage in Queen Street. It was extended in 1954. It produced about 800 boat oars and 100 pairs of sculls per month. In 1957 the company branched out to make wooden crates for Crompton Parkinson and occasionally small boats and caravans.

To make the oars the factory used an oar shaped template to score out the basic shape from Mountain Ash wood. These were then shaped with a circular saw and sanded with a fine blue-metal sanding belt. A final dressing was applied and then the oar would be ready for the drying shed.

After Tom Gonsalves' death in 1956 the factory was run by his son-in-law, Brian Favelle.

In 1973 the factory closed due to Rod Lawrence being interested in acquiring the property and also the poor quality of mountain ash wood it received.

The factory was located at the northern end of Queen Street at what was once 20 Sydney Street which later became 32 Queen Street. The Brands on Sale business is now located on the site. 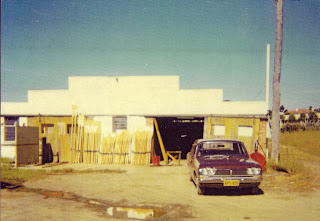 The oar factory was a recognisable landmark at the northern end of Queen Street for many years. (Photo supplied by Brian Favelle).