Locations from the Fisher's Ghost Legend

There is regular debate about where the main events of the Fisher's Ghost story happened. I have therefore attempted to make this clearer using resources held in the local studies section at the H.J. Daley Library and the opinions of various local historical experts from the area.

Where was Fisher's Ghost spotted?

Local farmer John Farley claimed he saw the apparition of Frederick Fisher in October, 1826. Opinions are divided about the exact location where the ghost appeared. The general consensus is that Fisher's Ghost was sited on the corner of Queen and Dumaresq streets in the centre of town. In the early days of Campbelltown a natural water way flowed down Dumaresq Street and passed through today's Queen Street. Evidence of this water way came to light when the remains of a corduroy bridge were located near where the entrance to the car park behind the eastern side of Queen Street and running off Dumaresq Street is located. It is believed there was another bridge approximately where Queen Street is located between the 7 Eleven and Subway today. It is that bridge that most local historians believe was the bridge that Farley saw Fisher's ghost.

The location for this bridge was in the vicinity of Worrall's farm in 1826. It was adjacent to Fisher's horse paddock.

The Queen and Dumaresq location is further supported by the story that Fisher pointed in a south westerly direction. This would mean he pointed towards the place where it is proven that his body was found.

Another piece of evidence supporting this location was that the pub that Farley ran into after spotting Fisher, The Harrow, was located only a short distance from this bridge. If the ghost was seen where today's Fisher's Ghost Bridge is then Farley would have passed a number of inns before reaching the Harrow and relaying his amazing claim. Why wouldn't he have stopped at the first one?

There are some who firmly believe that the apparition did appear where today's Fisher's Ghost Creek is. Adding support to this belief is that Worrall would not have had to travel as far to bury Fisher's body. A problem with the argument for this spot though is that there was no bridge in 1826 and the legend does have Fisher sitting on a bridge (some stories have him on a fence though). 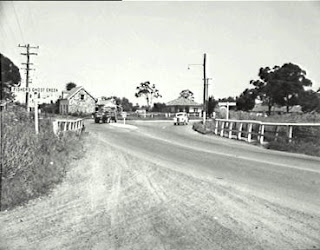 The above photograph shows how Fisher's Ghost Creek Bridge looked in the past. The date is unknown but judging by the vehicles is probably 1950s.


Where did Worrell bury the body?

In 1981 members of the Campbelltown and Airds Historical Society went in search of the location where Fisher's battered body had been buried. They used a copy of an 1826 hand-coloured plan of the scene of the crime and a surveyor's chain. From this they were able to pinpoint the location as the place where Fisher's Ghost Creek flows under the railway line. A plaque on the Namut Children's Early Learning Centre indicates that the centre is near the location of where Gilbert or Namut discovered the body. 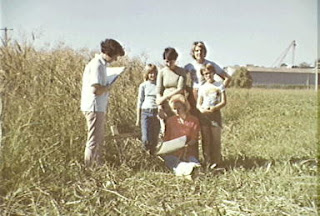 
Where was the pub that Farley told his story?

Research undertaken by David Patrick revealed that the Harrow Inn was located on the western side of Queen Street almost directly opposite Lithgow Street. It was probably built in 1822. The building housed various commercial premises over many years and was demolished around 1959.


Where is Frederick Fisher buried?

Fisher was buried in an unmarked grave in St Peter's Cemetery. Despite his brother living in the country and being well off, no headstone was paid for. Burial records for the cemetery prove that he was buried there but the location is unknown. There have been numerous claims on the whereabouts over the years but the truth is nobody knows where the exact location is.


Where was Worrall's House?

The man who murdered Fred Fisher, George Worrall, had his house located exactly where today's town hall is. His property bordered Fisher's. The land that Fisher owned is now part of Campbelltown Mall.