The Changing Face of Railway Street

The scene of today's Railway Street is completely different to that of even 40 years ago. So different in fact that not one building from then or before 1970 remains today. It has gone from a street bustling with shops, pubs, a police station and houses to a street dominated by a car park on one side to the new court house extension on the other. So, what did Railway Street once look like and what places could we find if we jumped in a time machine and travelled back to when it was a hive of activity?

If you were to walk from the Railway Station towards the street and start with the right hand side the first building you would have come across would be the Royal Hotel. This hotel was built in the 1840s and was originally called the Cumberland Hotel. It became the Royal Hotel in the 1890s. Licensees included Charles Laws, W. Hodge, Thomas Meehan and Mrs Sexton. The hotel was demolished in 1986. In the 1940s the hotel was a destination for the Drunks' Express. This was when people were forbidden to drink beer in a hotel on Sundays unless they had travelled more than 25 miles and regarded as "weary travellers". As Campbelltown was 32 miles from Sydney it was a prime target and the Royal would've been the first hotel encountered from the railway station.

Today's taxi rank is located where the hotel once stood. 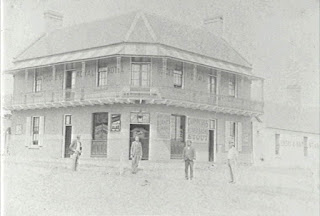 Continuing your walk up Railway Street you would then come across a house owned by Fred Sheather. Fred was the Town Clerk for the council for an incredible 43 years from 1901 to 1944.

Next was a house where Geoff Winton lived and this adjoined a milk bar at number 11 that he owned. It was famous for its ice cream and banana splits. In 1946 Alf and Elsie McLean purchased the shop. The business prospered by selling 7 days a week: morning and afternoon teas; sandwiches, drinks, ice creams and sweets; cigarettes and tobacco. In the 1960s Alf Billington took over and the property was later sold and became part of a car park.

Continuing the journey along the southern side of Railway Street in the 1930s you would next find Vic Ducat's Auctioneers followed by a barber shop. At the back of these shops was a snooker parlour ran by Paddy Hunt. In later years the auctioneers was replaced by a doctor's surgery. This building was owned by the O'Loughlan family who lived in a house next door at 29 Railway Street. This house was built in 1872 and had numerous owners over the years starting with Elizabeth Graham. The O'Loughlan family were the last to live there until it was demolished in 1967. According to Paul O'Loughlan the house was built of sandstone and was freezing in winter.

A 1970 photograph then shows a long building running parallel to Short Street that was used originally as stables but later for car parking. Then on the corner of Railway and Queen Street was Lack's Hotel. Built by Daniel Cooper in 1830 as the Forbes Hotel, in 1901 it was refurbished and renamed the Federal Hotel. The license was transferred to Herb Lack in 1929 and it became Lack's Hotel. After Herb's death in 1956, his son-in-law and daughter Guy and Tib Marsden took over. Lack's Hotel was demolished in 1984. A modern commercial building including a modern tavern now take its place. 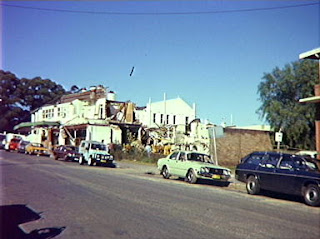 The other side of Railway Street, or the northern side, always contained fewer buildings. Beginning from the bottom of the street was the police house and next to this was the police station. The station was built around 1890 and was typical of the style for that period. The old cell blocks and stables were located on the building's north side. A tunnel was supposed to have linked the
cells to the nearby courthouse! The police station was pulled down in 1987. The new court house extensions are on the site of the old police station. 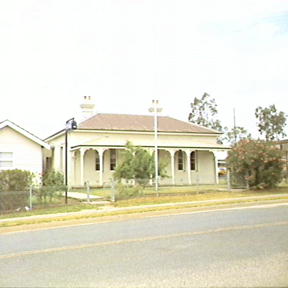 Above is the police station and adjoining police house as they looked in 1979.

Finally, on the corner of Railway and Queen Streets is the old court house built in 1886. 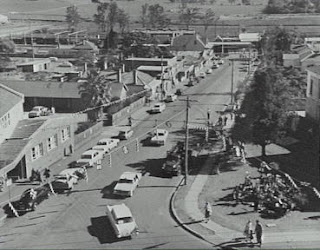 This photo was taken in April 1970 and shows how the street looked then. Compare it to the Railway Street of 2012. (Geoff Eves Collection).

Do you have memories of buildings from Railway Street's past? Please share these with us.