There were no banks in the early years of the town's settlement. Most business was conducted using the exchange of promissary notes as there was little cash in circulation. By the late 1830s John Hurley was virtually Campbelltown's private banker mostly because of his connection with John O'Sullivan the manager for Goulburn's Commercial Banking Company. From the mid-1860s post offices accepted deposits for the government savings bank. By the 1870s there was a need for branches in the larger towns like Campbelltown.

George L. Jones opened the Campbelltown Branch of the C.B.C Bank in October 1874. Banking was originally done from 282 Queen Street, now one of the four historic Queen Street buildings located opposite Campbelltown Mall. Records reveal that the manager was the only employee for several years, and was paid a salary of £12/10 a month.

In 1877, an assistant was appointed to the branch on a salary of £6/5/ a month. Conditions for the manager had improved, he was supplied with a horse and carriage and in increase in salary to £25 a month. In addition he was given an extra monthly allowance to provide for servants, fuel, feed for his horse and entertainment.

Life in Campbelltown could not have been easy in those days. Bank records reveal hardship with an entry in a ledger, "Purchase of pair of spectacles for use by customers, 1/ (10 cents).

The first purposely built bank building was erected in 1881. This is today's Macarthur Advertiser building. The building was used as a bank until 1985. Quaint stables at the rear were demolished soon after. 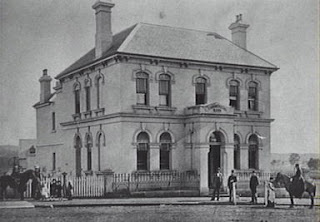 The Commercial Banking Company Bank in Queen Street photographed in 1881, the year it was built.


The Bank of New South Wales opened its Campbelltown Branch in February 1878. Its first manager was William Hurley, a son of the local member of parliament and publican, John Hurley, who for many years acted as a private banker. Hurley's Royal Hotel was later leased to John Graham and became the Family Hotel. The Bank of New South Wales opened in these premises. The building was located in Queen Street almost opposite Lithgow Street but a little to the south. 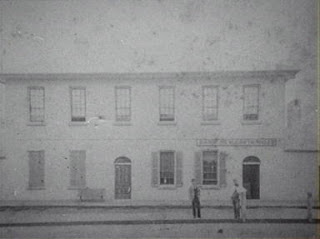 The Bank of New South Wales taken in 1894. It was still standing in the 1960s although much altered.