Macarthur Square Shopping Centre was officially opened on Monday, September 10, 1979. A crowd of about 600 people attended the opening. The centre cost $30 million and was completed six months ahead of schedule. Workers were still delivering the finishing touches to the centre on opening day as live music played in the background as well as the Macarthur Square jingle!

Various businesses immediately advertised their products and services. P & S Michael advertised a 2 piece safari suit for $89.90 and the supermarket sold Stork margarine and a 1kg bag of sugar each for 10 cents. Macarthur Dry Cleaners offered an enticement of $1.20 per article of clothing to be dry cleaned.

High drama struck the square one day in early December of 1983. A 3 year old boy plunged 10 metres from the balcony to the tiles below and fractured his skull. Ali Elassad and his brother were looking over the railing at Christmas decorations on the ground floor when the accident happened. Ali became known as the miracle boy of Sydney after he escaped death and permanent injury. After some weeks in hospital he returned home for Christmas.

I'm sure many people have wondered who the faces of the people are on the Bolger Street facade of the centre. The artworks were created by local artist Fiona McDonald in 2006 and are of people connected with the Campbelltown region. They include John and Elizabeth Macarthur, their son James, Nanny Barrett a representative of the local Aboriginal people, Charles Sturt, Hamilton Hume and local community identities teacher Kat McGuanne, town clerk Fred Sheather and publican John Hurley. 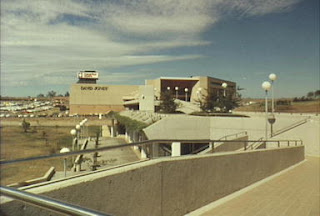 This photograph is of Macarthur Square looking from Macarthur Station. It was taken in the 1980s. (Macarthur Development Board Collection. Campbelltown City Library. Local Studies Collection.)
Posted by Andrew Allen at 12:38