The library's online historic photographs collection "Our Past in Pictures" contains a number of photographs taken by Kerry and Jones of George Street, Sydney. These are all dated 1886 indicating that a visit to the Campbelltown area was made by someone from their photographic studio that year.

Charles Henry Kerry was born at Bombala, New South Wales in 1857. He began his career as a photographer in about 1875, working for the Sydney portrait photographer, A.H. Lamartiniere. By 1884, Kerry had taken over the business and had his studio at 308 George Street, Sydney. Lamartinere absconded with Kerry's small capital but Kerry stayed on, and in partnership with C. D. Jones, built the small studio into the colony's largest photographic organization.

Kerry was later appointed official photographer to the Governor of New South Wales, Lord Carrington. In addition to his portrait work, Kerry took on a number of government commissions, including travelling through New South Wales to photograph Aboriginal peoples, their camps and corroborees and taking detailed interior views of Jenolan Caves. Kerry and Jones later became Kerry and Co. He retired in 1913 to take up mining and died in 1928 at his home in Neutral Bay.

The Kerry and Jones photographs in our collection are all sepia photographs. Some are taken of the Gilead property on Appin Road, including the windmill. Others include distant shots of Campbelltown taken from Terrys Hill and recognisable landmarks of the area from the time such as St Peter's Church of England and the cattle tank. 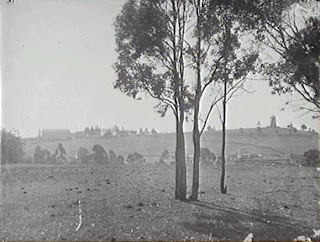 One of the Kerry and Jones images taken in 1886 of Mount Gilead farm buildings with the windmill in the distance.

Do you have any old photographs of the Campbelltown area? Please contact the library if you are interested in sharing them with us as we are interested in donations or the chance to copy them for our collection.
Posted by Andrew Allen at 14:29