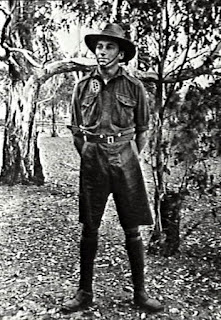 Arthur Samuel Hill was born locally in 1893. A Leumeah signwriter, he enlisted in the 33rd Batallion in June 1917. On the 3rd of April 1918 at Villers-Bretonneaux in France he was brushing his clothes when a shell landed close to him and wounded him in the thigh and shoulder. He was taken to the aid post 200 yards away but Arthur's life couldn't be saved and he died of his wounds two days later. His mate Private England described him as "a very nice chap about 22 or 23, dark." Private Hill was one of the many Campbelltown soldiers never to return from an overseas war. He was buried at St Sever Cemetery at Rouen in France.