One of the more unusual constructions built in Campbelltown is the Universal Power House or Saturn's Rings perched high on a hill in the suburb of Eschol Park. Saturn's Rings was built by a Polish immigrant from Ingleburn named Stefan Dzwonnik. Construction began around 1979 and continued for some years after that. At the time the building was regarded as one of the most spectacular in New South Wales with a limitless, panoramic view of the surrounding countryside.

So what was the purpose of this unique building? Stefan Dzwonnik had plans for it to be the mecca for a world-wide movement directed toward a better life on Earth. It was intended to become the home of him and his family; and the "power house" of his proposed Universal Power World Society.

The unique design of the house was based on the rings of the planet Saturn and comprised three concentric units. The largest on the top level was to provide living quarters for the family. The two lower levels were for the society.

Dzwonnik wrote a book around the time of construction called "The Universal Life Challenge". It discussed the Universal Power philosophy and outlined the aims and objectives of the society such as engaging in cultural and sporting activities and promotion of truth, love and peace.

Saturn's Rings was never completed.  When its frame used to be visible on the skyline, people would contemplate what is was, often mistaking it for a casino! It still sits on the hill at Eschol Park now virtually obliterated from public view by trees.  My research leads me to believe that Stefan Dzwonnik moved from the area and is now living on the Far South Coast of New South Wales. 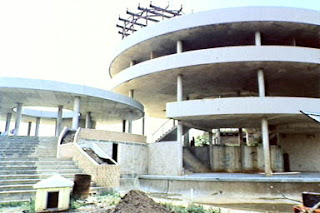