In 2014, I wrote about the old windmill at Mt Gilead and mentioned that it was struck by lightning in the same storm that caused the clipper Dunbar to smash into rocks at South Head, killing all on board except for one. This was not the only story that connected the Dunbar storm to Campbelltown.

In Julie Crowley's revised third edition of Verlie Fowler's Glenalvon Campbelltown, NSW there is a section that relates to a fascinating story. One evening in 1857, Catherine Keighran, sitting on Glenalvon's verandah with her daughters, was suddenly approached by an elderly gypsy woman wanting to tell their fortunes. She grabbed the hand of Catherine's 22 year old daughter Rose and gave her the following prophecy:

"You will never see again the gentleman who put that sparkling diamond ring on your finger. He will be drowned at his own door."

A few months later on the night of Thursday 20 August 1857, the Dunbar was driven into the reef and began to break up immediately. The gypsy's warning had come true and Rose's young gentleman had been drowned. His identity is unknown.

Rose married four years later to William Cyprian Curtis, one of the first five students at the new University of Sydney. They had a large family.

I wonder who the gypsy was and if she continued to have success with other prophecies. 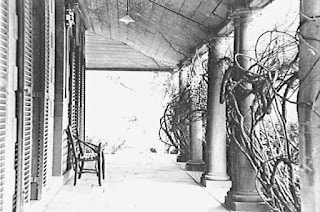 The front verandah at Glenalvon in 1925. It was here 68 years earlier that Rose had her encounter with the gypsy. 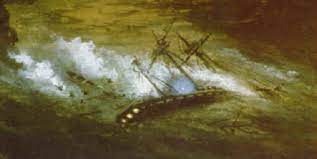 The wreck of the Dunbar (records.nsw.gov.au)