I find it fascinating to read how things were described in newspapers from yesteryear. The 20 December 1955 issue of the Campbelltown-Ingleburn News threw up some beauties. The heading "Gay Crowd at Railway Social" jumped off the page at me. Those unfamiliar with the changing use of the word "gay" might be excused for thinking this infers to a mardi gras type crowd that just so happen to have a fetish for trains! Reading through the article, I realised that the "gay" crowd were from the Campbelltown sub-branch of the Australian Railway Union. According to the article they held their...wait for it...Christmas meeting and smoko! These days of course, the word smoko is used very loosely for a quick break from work or for an actual short smoke break from the remaining few who still do have the occasional puff. I find it hilarious that the word was used back then in a serious newspaper article to describe a meeting for such a group.

There were other references scattered throughout the paper to demonstrate how far we have come, particularly with gender roles. Downes Department Store, once the go to for most of the town's commercial needs, were advertising their stock for Christmas. Two advertisements grabbed my attention. Firstly, "Mother would appreciate a Hoover for Christmas" suggested that the town's women folk would have all their wishes come true if they fulfil their role in life using the latest swanky vacuum cleaners. Men would be too busy with other jobs, supported by a similar Downes add on the next page claiming "Father would appreciate a Victa mower for Christmas"!

I wonder what researchers will think of our language and attitudes in 66 years from now! 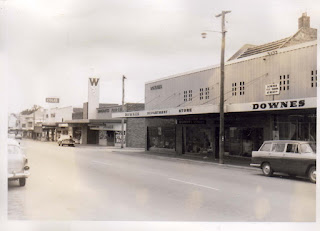 An undated photo of Downes Department Store in Queen Street