Campbelltown lost one of its treasures last week in Alex Goodsell. There wasn't much about Campbelltown that Alex didn't know. Born in Manly, Alexander George Goodsell OAM arrived in Campbelltown in 1932 as a young child and lived most of his 95 years here.

It was as a young science teacher at Homebush Boy's High School that Alex was encouraged to become more involved in the humanities by school administrators. Taking this advice, he attended his first Campbelltown and Airds Historical Society meeting in 1956. He soon became secretary and then, following the death of founding President Ivor Thomas, took over as President of the society. His term lasted for forty years.

Alex was instrumental in saving many of the town's heritage buildings. He was like a Campbelltown version of environmental activist Jack Mundey. Alex also took photographs of heritage buildings that no longer exist. Examples of these include 'Woodbine' and Leumeah House- both demolished in the 1960s. This shows how ahead of his time he was. Over the years he observed how attitudes to historic buildings have changed. People now realise the importance of preserving them for tourism and local interest. What a shame he couldn't rescue more.

Alex was proud and very fond of 'Glenalvon'- the home of the Campbelltown and Airds Historical Society. The Alex Goodsell Rural Exhibition Centre was established there to showcase the area's vast collection of agricultural tools and machinery. It is well worth a visit.

My personal memories are of him explaining why he believed Fisher's Ghost appeared to John Farley at the intersection of Queen and Dumaresq Streets. He would explain with tremendous knowledge and passion the details of the corduroy bridge that once spanned a waterway that flowed near this site.

Thank you for your immensely significant contribution to Campbelltown Alex. Hopefully future generations will take your advice: "If you ignore your history you do so at your own peril". 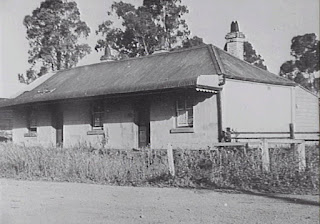 The "Stone Jug" was demolished in 1953. This photograph, the only known one of this building, was taken by Alex in 1952. (Goodsell Collection, Campbelltown and Airds Historical Society). 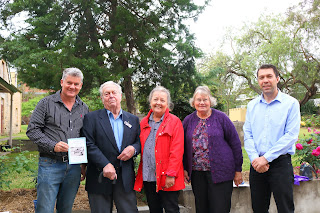 I am pictured on the extreme left next to Alex at the launch of my Grist Mills on the Tripp family.