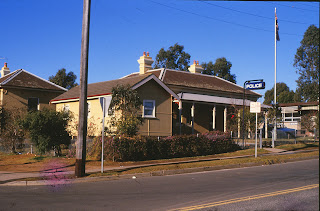 The Campbelltown Police Station was once situated in Railway Street. Dates for its construction vary from 1880, the late 1880s and 1890. It replaced an earlier station around the corner in Queen Street near the Courthouse.

The police station was built in typical late nineteenth century style for police stations. It had cast iron brackets decorating its ten verandah columns. To the north of the station were the cell blocks and stables. These cell blocks were linked to the courthouse in Queen Street by a tunnel. A police sergeant's residence was situated next to the station until it was demolished in 1970.

The station operated until August 1985, when it became far too inadequate for Campbelltown's growing population. A fibro extension to ease the congestion did little to fix the problem.

The old station was eventually demolished in 1988 and it was controversial. The Attorney General's Department owned the building but regarded the station as having no real historical significance. The National Trust however recommended that it be retained. Members of the public were vocal about its pending demolition including Deputy Mayor John Hennessey, who claimed "this is nothing short of public vandalism". A new court complex now stands on the site. A more modern and much larger station was built in Queen Street. 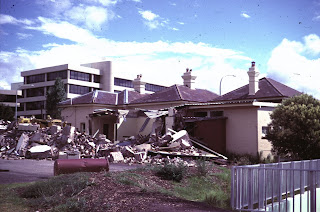