Travelling along Appin Road has long been a hazardous trip. If you were doing it in 1866 there were even more reasons to be filled with trepidation. My research has revealed at least three terrifying hold-ups between Campbelltown and Wollongong during this year, leaving the community shaken.

It is believed the same bushrangers robbed again about a week later. At about 3am and four miles (7kms) from Appin, the bushrangers stopped the horses, and ordered the the coachman to bail up. The coachman and contractor was James Waterworth, and he was accompanied by the driver, a man from Wollongong and two youths returning either to home or school. The bandits tied everyone up, searched and robbed them. They also undid and rifled the mail bags, opening the letters, and helping themselves to whatever they liked. After leaving the letters scattered about the road, one of them cracked the whip and they drove off, leaving the poor passengers tied up. They eventually untied themselves and raised the alarm.

A few days later a girl on a farm on the Macquarie Fields Estate, was returning from school, when she picked up a parcel which turned out to contain 36 cheques, amounting to £360, and was a portion of the proceeds of the robbery. The cheques were handed over to the police and later a man from Appin was apprehended by the police.

James Waterworth was the coachman on Appin Road for many years. He died in his nineties in Campbelltown in 1920 after a lifetime of amazing stories of bushrangers and robberies. He was held up by bushrangers on three separate occasions. Before the robbery described above, James was held up once with a sickly man as his passenger. He was coming back from Wollongong with £300 and when the bushrangers stuck up the coach, James picked the little man up and carried him to a nearby shed. "You surely wouldn't harm this poor sick fellow" he said, and the bushrangers let him go.

Joshua Bray lived at Denfield on the Appin Road. In 1866 he wrote "They are very much excited about here, the mail was robbed ten days ago...The night before last they stopped it about a quarter of a mile from this house- the coachman and the passengers came about 4 o'clock in the morning to tell us. These robberies take place in the night...they were hiding all their jewellery. Papa has loaded his pistol". Bray describes this robbery as a quarter of a mile from Denfield or about 400 meters in today's measurements. This would rule out the robbery where they tied the victims up as it was seven kilometeres from Appin and therefore too far from Denfield, however it could have been the one where Waterworth carried his sickly man to safety.

The bushrangers are long gone but the same narrow and winding Appin Road continues to move thousands of people between Campbelltown and Wollongong every day. 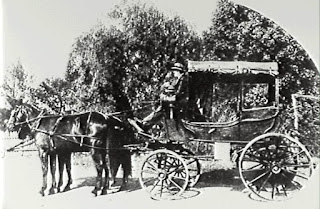