In Memory of Violet

Occasionally in my research I stumble upon a story that tugs at the heartstrings. One such story was an accident that occurred at the St Andrews farm at Minto almost one hundred years ago.

On the afternoon of 10 May 1923, Phillip Gray was cutting chaff on the farm at St Andrews, assisted by his two sons. The chaff cutter was a horse-driven machine, and whilst engaged in the work five-year old Violet Gray walked into the shed without being seen by her father. Phillip was busy working the chaff cutter at the time. Violet reached across for a bag near the chaff cutter. Her frock was caught in the driving-wheel of the machine, and she was hurled around several times before her father was able to stop the machine. Poor Violet's head was injured too severely to be saved by the doctor and she died a few minutes after his arrival.

The Gray's had recently moved from near Robertson in the Southern Highlands. Violet was born at Kangaloon near Robertson in 1917. She was the second youngest of nine children born to Phillip and Ellie (nee Papworth). Phillip died in Iolanthe Street, Campbelltown in 1932 and Ellie died in 1964. All three are buried in St Peter's Cemetery in Campbelltown. 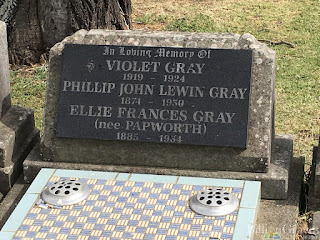