With the long overdue coverage and interest recently in women's sports, I thought it was timely to bring to your attention an athletics star from the early part of last century. Her name was Bessie Grandemange and she had a connection to Ingleburn.

Bessie Grandemange was a champion of women's athletics in Australia from 1915 to 1922. Her father and brothers were also successful athletes, but Bessie starred with a series of world records from 100 yards to the Triple Jump. She remained undefeated in scratch races throughout her career in Australia.

Bessie first displayed her immense talent in a ladies race handicap at Canterbury in 1915 at age 16. She ran her 97 yards in 11.8 seconds, beating some of the more fancied runners. This was the start of her excellence over the next seven years.

Bessie is pictured here in 1922

Bessie's coach and manager was George Craft of Ingleburn. George was a huge supporter and admirer of her talents and regularly boasted about his young athlete. George Craft was a well known sporting man and poultry breeder in Ingleburn. He bred ducks and often judged them at the Royal Easter Show. Since the outbreak of the First World War he had been the secretary for most patriotic events and functions in Ingleburn. One event was a sports meeting at Ingleburn to assist the War Chest Fund. This was held on 22 September 1917. It was undoubtedly George's influence that saw the now famous athlete compete at the meeting. The highlight of Bessie's performances was an Australian record for the hop, step and jump. She cleared 33ft 10in (10.3124 metres) which George testified to the correctness of.

After the war and the Spanish Flu outbreak, Bessie continued to compete. She went on an unbeaten streak, that included a challenge in the press by Ruby Baddock that Bessie accepted. Around 1922, the athletics scene for women in Sydney had declined and there were fewer opportunities for Bessie to appear in public. She married a man named Arthur Callard and they went to Britain to live. In 1925 she returned to competition in the British women's amateur 100 yards championships. She won her heat but could not run a place in the final (her former professional status seemed to have been cleared). This was followed by a run in the British Games at Stamford Bridge. There is no record of Bessie Grandemange ever racing again. 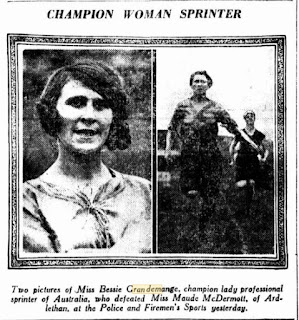 The story of Bessie Grandemange then becomes a mystery. She separated from her husband and child and it was rumoured that she emigrated to New Zealand, possibly dying in the Napier earthquakes of 1931.

One interesting anecdote- on the evening of the War Chest sports day at Ingleburn, George Craft was charged with selling liquor without a licence. The charge was eventually dismissed.

Thank you to Graham Thomas and John Crossingham for much of this information.