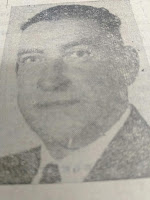 The Campbelltown community was in shock at the death of Bill Coogan in 1962. Bill was known as Brother Bill to the towns people from the way he addressed all and sundry. He was a cheery butcher (aren't all butchers) who had a shop near the corner of Queen and Railway Streets and adjacent to Lack's Hotel, known as Coogan's Butchery. His main contribution to the town however was as an alderman on Campbelltown Council between 1956 and 1962.

William Coogan was born in Campbelltown in 1908. The Coogan house was at the bottom of Milgate Lane, close to the Railway line where Bill's father Robert worked as a railway yard attendant and fuelman for locomotives. Bill began his working life as a drover before working for Tildesley Brothers butchers of Campbelltown. This shop was about opposite the Old Post Office that still stands in Queen Street. He later opened a butchery business at The Oaks before opening his Queen Street business in 1946.

As an alderman, Bill was noted for his forthright opinions. He was always fighting for faster planning of the area and believed the Cumberland County Council was hindering development of the area. He would sit in at as many committee meetings as he could so he could add to his knowledge of Council affairs. He was also heavily involved with the Campbelltown Kangaroos Rugby League Club and was a lover of horses.

The genial and humorous Brother Bill collapsed and died while attending a show at Bathurst on May 5 1962. He died the next morning. He was only 54. Two minutes silence preceded the football that weekend in honour of one of the Kangaroo's staunchest supporters.