The closure certainly didn't happen overnight. St Peter's Anglican Church first sent a request to Campbelltown Council in June 1962 to consider closing the street from the bowling club to Cordeaux Street. Council investigated the costs and sought feedback from the public. The only negative response came from a J. Moore who complained that it was too close to the main shopping centre and would reduce valuable parking. So council approved the proposal subject to the church providing an area for parking adjacent the bowling club.

For reasons unclear, the project stalled for most of the 1960s. It did reappear in council minutes in 1965, after the proposal was listed in the Government Gazette. The Minister for Lands was of the opinion that "it was expedient to close that section of Howe Street, Campbelltown, separating "Mawson Park" reserve for public recreation." Objections were again sought and a notice placed in the local media. It appears nobody objected this time. Still, it was 1968 before things started to move. Towards the end of 1968 a draft agreement for a six foot strip of St Peter's Church land for car parking opposite the bowling club was drawn up. In July 1969 the resubmission of the proposal was received. It aimed at having the work completed before the bicentenary celebrations in April 1970. Council approved the proposal.

The park was extended and more car parking space was made available in Cordeaux Street. The street was blocked off and grass planted for a public reserve. It was hoped that the warmer summer conditions would aid in the growing of the grass. The work was completed in early 1970. A number of houses in Cordeaux Street, including Lysaght's "Rosangeles" on the corner of Cordeaux and Oxley Streets, were demolished for extra parking. 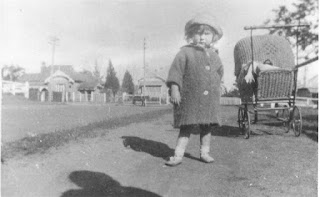 An undated photograph of Billy Rixon in Howe Street. This is long before the street was closed off from Browne Street. In the background are numbers 7 and 9 Cordeaux Street. Number 9 belonged to Dr Mawson. 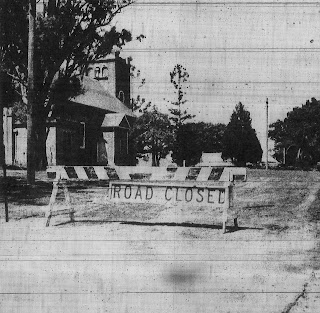 The road closed in late 1969. (Campbelltown and Ingleburn News)
Posted by Andrew Allen at 14:33