Last Sunday marked the Centenary of the Armistice. The ceremony at the Australian War Memorial in Canberra was very moving, but no more than the deeply moving ceremony at St Patrick's College for Girls last Friday. A number of stories of soldier's experiences in the Great War were told by the students of St Pats, who had family connections to soldiers, and many a tear was shed. The girls did their school proud. They inspired me to do some research into some of the area's own soldiers and I came across two brothers whose story I had previously been unaware of. Most of their story comes from Lauren Hokin's comprehensive book "ANZACS of Macarthur".

Percy McDonald was 26 when he enlisted in the AIF. He was living in Atchinson Road, Macquarie Fields. Percy was joined by his brother Lionel, who signed up the following day. They both left Sydney on the 8th of October 1915. Things started to go wrong immediately after they arrived in Egypt, when Percy was admitted to hospital with mumps. In June the following year their battalion proceeded from Egypt to the Western Front in France. Shortly after arriving in the frontlines, they participated in action during the horrific Battle of Fromelles. Tragedy was to strike between the 19th and 20th July when Lionel was reported missing in action. Despite his brother's disappearance, Percy had to continue with his duty. Percy and his family hoped against hope for any news. Percy survived Fromelles and by August 1916 had been promoted to Sergeant. Sickness was to follow, including hydrocele and later hospitalization from a hernia from an undescended testicle. On the 4th of May, he was sent back to Australia for home service. He was later considered medically unfit and discharged in August 1917. 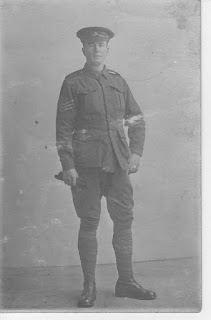 Percy returned with his new bride to the Ingleburn area. They lived in a house in Fawcett Street, Glenfield named Tillicoultry. At the time, the McDonalds received news that a Court of Enquiry had concluded that Lionel was killed in action in July 1916. Witnesses stated that they had seen him lying dead in the German first line trench. This resulted in years of correspondence and paperwork that had to be filled out and forwarded to the army and other institutions. In 1921 Percy contacted the army and requested that all correspondence be sent to him, as it was "opening old wounds" and he feared for his father's health.

Percy decided to take up arms again in the Second World War! His twin brother Ernest signed up in 1942 and Percy joined him a week later. He was appointed Lieutenant of the 11th NSW Battalion Volunteer Defence Corps. He resigned the following year.

Percy was a keen artist and his unique drawings and paintings were often seen on exhibition. He passed away on the 18th of May 1964. The location of Lionel's remains are unknown. 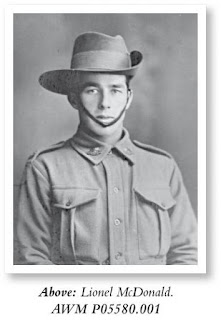 HOLKIN, Lauren 2016
ANZACS of Macarthur: the men and women who served in The First World War
Campbelltown: Veterans Recreation Centre
Posted by Andrew Allen at 13:56