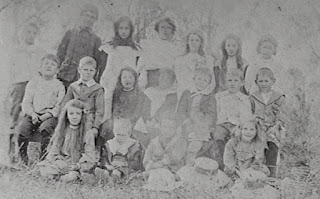 Occasionally I come across information that I was completely unaware of- just when I think I knew everything about Campbelltown there is to know! When researching an enquiry for someone, I discovered there was a school in the area named Avoca Park Public School. This school operated for a very brief period. It was established in 1881 and closed down about 1910. So where was it? Further research revealed that it was situated next to Kilbride homestead, today part of Kilbride Nursing Home in Rosemeadow. A parish map in our collection shows where the school was located: between Appin Road and the water race that ran close to Kilbride.

Amazingly, a search of our photograph collection resulted in a photograph of this school! Taken in about 1909, the faded and grainy image shows a group of children from a different age. A time when the world seemed more innocent. When the pace of life moved so much slower. When World War I had not yet arrived to scar and destroy families from throughout Campbelltown and the country. In front of the photograph are a couple of straw hats and perhaps a cap. I wonder what lives these innocent children were to have?

A search of the Government Gazette on Trove revealed some of the teachers at the school. A Mr Walsh moved there in 1885, followed by John Bath, Miss Crouch, Miss Dash, Miss O'Reilly and Miss McManus in 1908. The children are unidentified, although it is possible that a Haydon girl (later Mrs Jackson) is in the photo. An alderman on Campbelltown Council by the name of Roy Fitzgibbon also attended the school.

Nothing remains of the school today.