KO'd by his Uncle

It's summer time again and many of us will head to the beach, pool or one of our local waterways. Unfortunately hazards come with swimming, like drowning, being stung by blue bottles, swallowing nasty pathogens or...being knocked out by your uncle!!

One stifling hot day in early January 1966, a family were spending a relaxing and fun picnic at the Georges River at Macquarie Fields. Twelve year old Mark Payne from Goulburn was swimming in the river, when all of a sudden his uncle fell on him from a tall tree above the river. The uncle had climbed the tree on the eastern side of the river bank in order to put up a swing. As he bent forward to adjust a rope, he lost his footing and fell directly on to his nephew.

Mark lost consciousness, was pulled from the water, and a member of the party set off to call an ambulance. The ambulance soon arrived together with two policeman from Ingleburn. On arrival, they stripped to their underclothes and swam with a floatable stretcher to the far side of the river where an unconscious Mark was lying. He was brought back to the other side of the river bank.

At Liverpool Hospital, an examination revealed he had sustained a fracture at the base of his skull. He was reported to be still in a serious condition at the end of the next week. No further reports in the weeks after the accident could be found. I wonder did Mark recover and I wonder, in the days and even years that followed, what the relationship between Mark and his uncle, R. Bowerman of Sefton, was like? Perhaps someone out there knows or knew them?

In an interesting sidebar, the two policeman involved in the rescue had to be taken to hospital to treat severe and large blisters on their feet. The barefoot constables had to walk over searing black sand at midday after swimming to the boy. 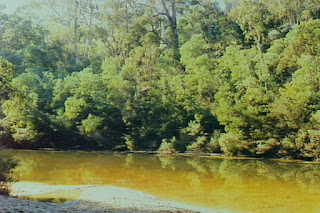 Beach area on the Georges River at Macquarie Fields taken in 1999 by Stan Brabender
Posted by Andrew Allen at 14:37