The Old Swaggie of Wedderburn 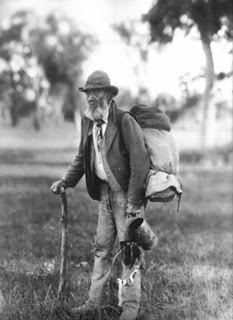 When I think of old swagmen from our country's distant past, the photo above is the sort of image that my mind conjures up. There was always something mysterious about them. Like they had no name and didn't come from anywhere in particular and weren't planning on going anywhere special. I remember my grandmother relaying stories of swaggies who visited her shack in the bush during the Great Depression and how they would often 'scare the blazes' out of her and her siblings. They're such a fascinating component of that time when life was so difficult and every day proved a challenge just to survive.

I recently discovered an interesting account of such a swagman in one of the library's resources. Hollie Rees (nee Knight) was born in Warby Street Campbelltown around 1924, but spent her childhood at Wedderburn. She describes her memories as a small child and that of a swaggie well-known at Wedderburn during the height of the Depression. It's compelling reading. Rather than me summarizing it, I thought I would provide her full description in this post. I've no doubt you'll find it enjoyable.

Once a year there used to be an old swaggie. I used to love that old swaggie. He used to come up opposite where the church is, there used to be an old building called the dump. It was a big square place where people that didn't have a lot of fruit used to put it there and the man in the truck used to call there first and he knew if it was Rice's fruit he didn't have go to Rice's, if it was Thompson's fruit he didn't have to go to Thompson's or wherever, and the swaggie used to camp in there.

He had this beautiful cattledog. He came there every year for about four or five years and we all used to race up after school and we'd see the smoke from his fire and we'd say oh, he's back. We never ever found out his name. His dog was blue, and he would disappear the same as he arrived. He'd have a rest and about three or four days later he would just disappear. We never knew where he went or where he came from, but he was a nice old bloke.

He carried his bedroll rolled up, it was a grey blanket with a red stripe, and everything rolled up in it with his billy hanging off the side. It was over his back with two leather straps and practically everything he owned was in that. He just slept on the ground with his dog to keep him warm and he had a bigger billy as well, that was all he had. To us he was ancient, but I would say he may have been maybe his mid-fifties , early sixties, with a beard. He was ruggedly built with vivid blue eyes, I'll always remember those eyes. They would look right at you, he was real happy, he was always laughing. Just happy. He always used to greet us with "Hello kids, been to school again. He'd say "Good, learn what you can".

The old billy was used as a cookpot, I think it used to be stew cooking in there, but what he ate the dog ate. I have never ever seen him go to a shop or anything, he carried it all with him in that bedroll.