Did a Campbelltown Man Shoot Down the Red Baron? 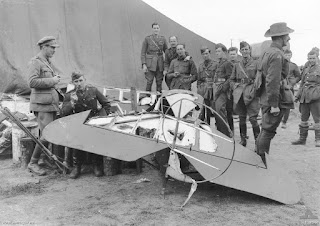 There is still argument over who shot down the Red Baron- Captain Baron Manfred von Richthofen in a fierce World War I battle over France on April 21, 1918. Some believe that a Canadian pilot in the Royal Air Force, Captain Roy Brown had the distinction. However two US aviation historians claim that it was Australian gunners that were responsible for the shooting down of the Red Baron's plane. One of those gunners, Rupert Weston, claimed that it was him that shot down the Red Baron. Rupert lived the last 41 years of his life in Campbelltown.

The two American authors published a book in 1969 called "Who Killed the Red Baron" in which they firmly argue that Gunner Weston and G.B. Popkin ended the life of the Red Baron. The battle took place over the Australian artillery lines near Vaux-sur-Somme in April 1918. The authors corresponded with Rupert Weston for seven years before the book was published and a photograph of him appeared in the book. The official war historian CW Bean backed the author's claim by writing that ground fire from the Australian lines brought the Red Baron down.

Rupert Weston was born in Victoria in 1888 and married and moved to Sydney after his return from the war. The couple eventually moved to Campbelltown in 1937 before Rupert tried unsuccessfully to enlist in World War II. His heart condition and World War I injuries ruled him unfit. At the time doctors only expected him to live for three months. He lived, however, until he was 90!

After World War II he became part owner of Weston Son and Curnow, a mixed business and hardware store in Queen Street. He was a keen bowler and had a strong link with the Campbelltown Bowling Club. Rupert died in 1978 still adamant it was him that shot down the most famous war pilot in history.

Members of the Campbelltown City Bowling Club. Rupert Weston is standing in the middle row on the extreme right. (W. Wilkinson Collection).