High rise development in our city is a topic that is currently dividing opinion. The latest controversial proposal is the construction of high rise next to the old CBC Bank and later Macarthur Advertiser building in Queen Street. However the arrival of high rise to Campbelltown dates back to the early 1960s with the building of Campbelltown Council's brash new administration centre. The library has in its collection a number of fascinating photographs of the construction of this building that I wanted to share with you.

The administration centre opened on Saturday, 28th November, 1964. It was easily the highest building in the town and was seen for kilometres around Campbelltown. The design was seen as "providing a strong vertical emphasis to the Civic Centre". Mayor Fraser at the time called it "a symbol of our faith in the future". The first stage of the Master Plan was prepared in early 1961. The first sod for construction was turned in June 1963 and by November the steel frame had begun to take shape. Work continued on through 1964 and by July the building was near completion.

The following photographs show the various stages of construction. They were taken by Jim Waugh. It's interesting to also look at the built environment around the administration building, most of which has disappeared. 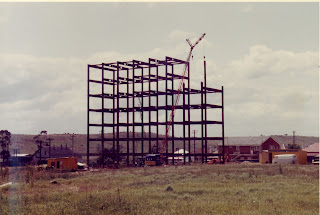 This is the earliest construction photo we have in our collection and would've been taken in late 1963. The photo is looking towards Broughton Street. In the background to the right are the old ambulance station and to the left of the construction is the old milk depot. Both buildings no longer exist. 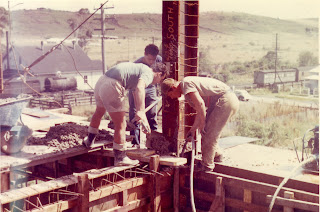 The next photograph above shows workman pouring concrete. These are the days before WHS became an issue! This would be in early 1964. In the background is the milk depot which stood on the adjacent to the railway line in Broughton Street. It was burnt down in 1969. 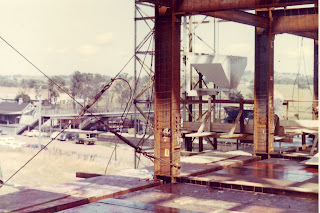 The above image is looking south west with the railway station in the background. 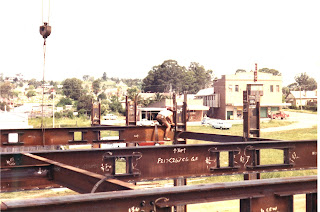 This one shows a lone worker perched precariously on a steel girder. The view is looking east and shows the old Macquarie Cinema in the background that was demolished in 1979.